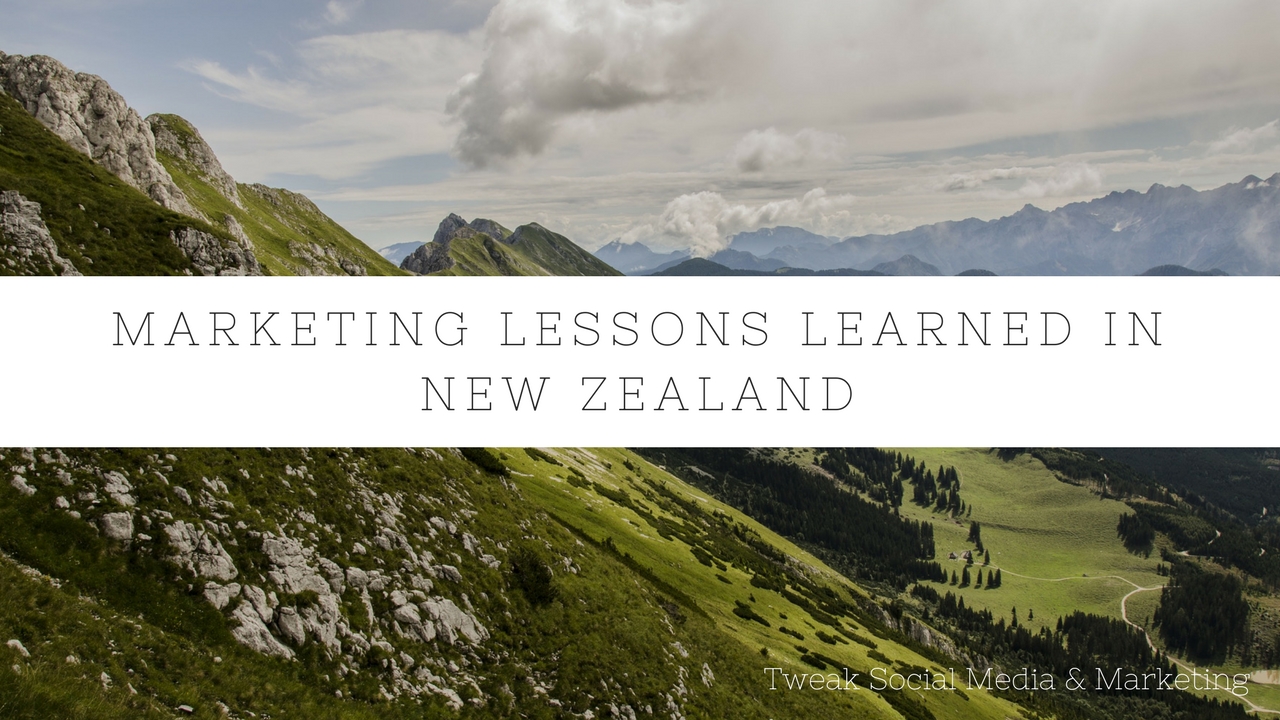 Way back in March of 2013, Boss Lady Martha traveled all the way to New Zealand to visit her daughter. Not only did she experience stunning landscapes and a unique culture, she also learned about marketing techniques in a place that is quite different than Door County, Wisconsin. Martha is so incredibly excited to be returning to New Zealand in May, and we’re sure that she will come back with more insights about marketing on the other side of the world. Until then, read her thoughts on her last trip and the marketing lessons she learned along the way!

This month, I was lucky enough to be able to travel to New Zealand to meet my daughter Britt for some sightseeing and "tramping" (Kiwi for hiking). The trip was a journey into the land of the Hobbits and the scenery was absolutely awe-inspiring. When I'd ask a local (and I did this several times) "Do you know how lucky you are to live here?" They'd always smile and say something like "Why yis. We ah lucky, ahn't wey?"

As Britt and I tooled around the South Island, the way Kiwis use their quirkiness, positive outlook and sense of humor to brand and market Kiwi goods and services delighted me. Here are two examples of merchandise marketed the "Kiwi way".

Because it was summer in New Zealand, there were a lot of RV's and campervans parked at trailheads. The most prominent brand was called "Jucy". You can't miss a Jucy campervan because Jucy Campers are bright green and purple, have a pin-up girl on them and phrases like "This Jucy comes with everything AND the kitchen sink" or "Music and passion are always the fashion at the Jucy" printed on the sides in white speech bubbles. I was entranced with the colors, the style and the average age of a Jucy customers (seemed to be 30-45) so when I got back to the states, I checked out Jucy's website. I was able to learn of the story of how two young Kiwis began the business in 2001 in a small garage in Auckland. It goes on to tell you the philosophy behind the business and how since then, they've grown to now have branches in New Zealand, Australia and the U.S.

The second story is about a brand of Kiwi soda pop. Britt was telling me how her partner, Colin, came home from grocery shopping in Auckland with a big bottle of L & P (Lemon & Paeora) and was all excited because he'd heard it was very popular in New Zealand and it had been on sale. Brittany isn't a soda drinker, so the bottle sat unopened in the fridge until one day her stomach was upset and she had a glass because "it sounded good". A short time later, her stomach settled and she felt better. She wanted me to try it so we bought a bottle to share. The slogan for L & P is totally hilarious: "World Famous in New Zealand" with a description below saying, "Good Lemonish Stuff". I took a taste. L & P is mild, lemony and not super sweet. I then checked the ingredients and listed alongside sugar and lemon juice is carbonated mineral water (apparently from a town called Paerora) which might and might not be what settled Britt's stomach.While neither of us are soda drinkers, we bought two more bottles to split the week I was there. Later I checked their Facebook page and "liked" them, (because I do), and found that their sense of style translates seamlessly to their Facebook page. It is as comically pretentious as the whole concept of marketing a simple soda as a major Kiwi accomplishment. I also learned L & P can only be found in New Zealand and that it is now owned by Coca Cola.The marketing lesson I learned in New Zealand is really just a refresher. It's a lesson that begins with knowing who you want to be (sell, serve) and staying true to that. It's about not being afraid to be yourself or to be different. It's a lesson about presenting products by emphasizing positives. It's a lesson about great branding. Branding is all about telling your story in the most compelling (even quirky) way, time and time again. These are two Kiwi success stories but this can be done anywhere. To be continued in May 2018!